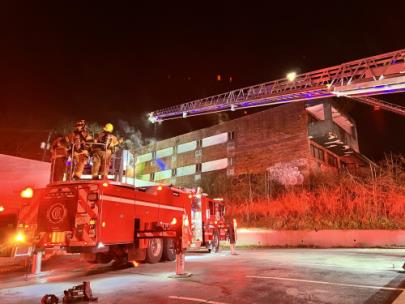 The Chattanooga Fire Department worked on a second-alarm commercial fire downtown late Friday night that is currently under investigation.

The call was made at 10:09 p.m. in a vacant building at 1810 East Martin Luther King Boulevard, in the former Lamar restaurant and motel, which had been abandoned for several years.

The District 1 Battalion Commander (Green Shift) was driving in the area and spotted smoke. He walked around the block and saw fire coming out of two windows on the side of the building. It called for a full commercial response then a second alarm a few minutes later due to the size of the building.

Crews arrived and launched an aggressive interior attack. They located several fires on the first floor and extinguished them. The fire spread to the second floor and firefighters made another attack on that floor. Once they got the flames under control, they continued the overhaul and checked for any extensions. Obstacles were created by the amount of debris and contents inside the building accumulated by homeless occupants who used the building as shelter.

A search was conducted and no one was found in the structure. There are no casualties. Green Shift crews at the scene worked meticulously on both floors to ensure the fire was completely extinguished.

The Tri-State Mutual Aid Association helped provide coverage at fire stations, including assistance during a motor vehicle accident with entrapment.