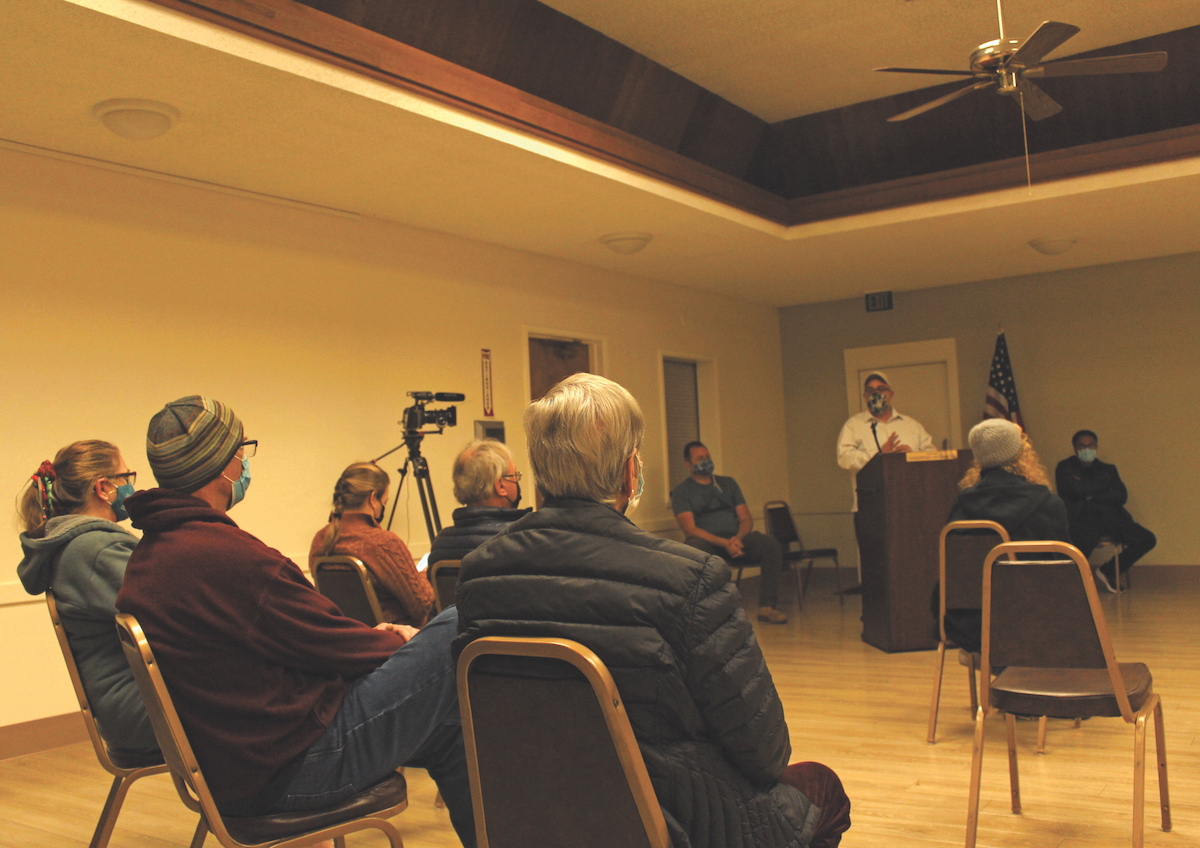 Gabriel Barhell, 56, is a former Tennessee Air Force medic who served in the First Gulf War.

He came to Santa Cruz with his girlfriend, a traveling nurse. And when they broke up, he ended up living in the forest.

â€œThere was a problem with the system where I had nowhere to go,â€ he said. â€œI was homeless in San Lorenzo Park and I was attacked. “

During the pandemic, following the 2020 CZU Lightning Complex fires, various programs were rolled out across the county to try to find a place for homeless people to live.

Barhell says he ended up staying, at one point, at Motel Santa Cruz, and then, at another point, at the Hitching Post Studios Inn. But he says he and others previously homeless would be evicted when they needed to rent the rooms to earn extra money.

Eventually, he was invited to live at Jaye’s Timberlane Resort, along with several other veterans, which he said did him a lot of good.

â€œYou have nature, the trees, the community,â€ he said. â€œIt’s just a safer environment.

It is this model that a group of local associations sought to reproduce permanently on the property.

And last week, they had the opportunity to present their plans for the community at two meetings at the Highlands Park Senior Center.

In front of about 20 people on December 10, Chris Cottingham, executive director of the Santa Cruz County Veterans Memorial Building, said they bought the rustic property in November, with escrow due to close in January.

Their vision is to build small-scale permanent supportive housing in the hopes of replicating it across the county in the future.

He said that as the owner they will have a strict drug and alcohol policy and will ensure residents respect the property lines.

Although there are currently two RV parking spaces on the property, the group plans to use them to set up modular housing or something similar.

“There will be no tents,” he said. “We’re trying to get people inside.”

The group plans to submit an application to the California Department of Housing and Community Development in the coming weeks and hopes to receive funding through its Homekey affordable housing program.

If all goes well, Phase I of the Veterans’ Village could open as early as March 2022, with a small-scale expansion rolled out by November.

David Pedley, who spent 13 years in the Marine Corps, including touring Iraq and Afghanistan, was once homeless. Now he is working behind the scenes to get this housing project started.

During the meeting, he described how he had drifted and arrived in Santa Cruz on the word of another Marine.

He lived in a Winnebago and ended up visiting the Veterans Memorial Building at 846 Front Street in Santa Cruz. The first free meal he ever ate there is etched in his memory.

â€œThey served fish,â€ he said. â€œAnd I hate fish. But I ate it anyway, because you’re homeless.

Through the Veterans Room, he began to make connections with local service providers.

He ended up in the 14-bed Paget Center, an emergency accommodation that helps veterans access resources as they transition to a more permanent situation.

He is grateful that he was offered a job at the Veterans Memorial Building and secured a house in the St. George Apartments, with the help of a Section 8 voucher.

“I couldn’t have done it without this support,” he said. “It really worked for me.”

Pedley says it’s hard to describe how much easier this has made his life.

â€œI didn’t just come back from roaming,â€ he said. â€œNow I have a wife and I have a child. And I have a house.

Cottingham said there were far too many homeless veterans and they would make sure to select the wisest to invite to live in Ben Lomond.

There are already four veterans there, including Barhell, on a different program during a pandemic.

Barhell came to the meeting because he says permanent supportive housing is exactly what the veterans community needs.

A meeting participant raised concerns about the condition of the current septic system on the property, its zoning, and a waterway that crosses and connects to the aquifer.

Cottingham said the group will involve the community every step of the way and is confident they will gain the support of supervisor Bruce McPherson, who is a veteran himself.

“This is not a ‘bridging’ program,” he said. “Ultimately, it’s the idea of â€‹â€‹building a community of like-minded individuals.”

The Phase II development they are considering includes things like transforming a three-car garage into residences or filling the pool to create more area to build on while lowering operating costs, without reducing bulldozing what there is to put in a multitude of high density rentals.

And he says having case managers on site will allow issues to be addressed before they metastasize into a serious problem.

â€œI hope we are welcome in the community,â€ he said, adding, â€œâ€¦ and the veterans too. “

Jack Tracey, chairman of the board of the Veterans Memorial Building, said the group considered other options, including an area and a motel in Watsonville, before moving to Jaye’s Timberlane.

Free Guide executive director Evan Morrison said that as a resident of Boulder Creek, he viewed this project through the lens of a resident of the San Lorenzo Valley. He says he’s invested in making sure he fits into the community.

During the question-and-answer session, a man said that “the elephant in the room” are real estate brokers who have already started referring to “homeless” by stoking fears about the project online.

Cottingham has heard this before, and he has a few things to say about this tactic.

â€œPeople who move there will no longer be homeless,â€ he said, adding that the price they pay for the land is likely to increase the value of properties, not destroy them. â€œWe plan to invest a considerable amount in the property. “

Moreover, the half a million dollars they raised in the last month alone suggests that there is a lot of community support for what they are doing, he added.

â€œAs a community, this is our opportunity to show everyone how this is done,â€ he said, adding that on-site assistance will be tailored to the PTSD and isolation issues that the elders are facing. fighters often face. â€œCommunity, support, fellowship is what people need.

James Walter, 68, a neighbor of the site, says he barely noticed the veterans living there now.

â€œIt’s calm,â€ he said. “They are going to examine these people – no pun intended – extremely well.”

An old Kia Niro is better as a motorhome