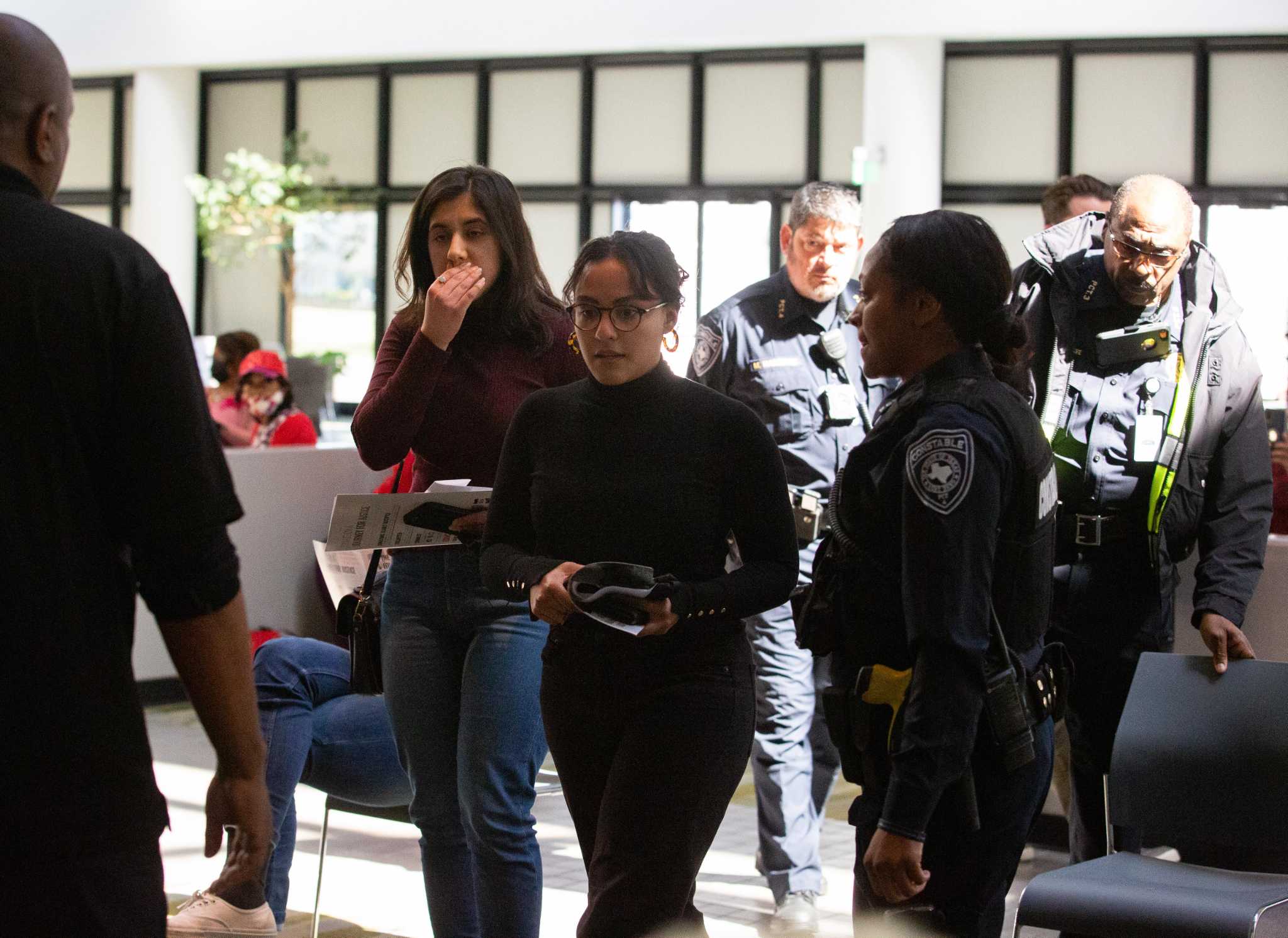 A small group of protesters took to the stage Saturday during “A Day of Remembrance: A Black History Month Honoring Sugar Land 95” to question the proposed name of a cemetery.

They asked: Why will Sugar Land 95’s final resting place be named Bullhead Camp Cemetery, after its position along Bullhead Bayou Creek, instead of Ellis Cemetery or Cunningham Cemetery, after the plantation owners of sugar cane Littleberry A. Ellis and Ed H. Cunningham who profited from convict labor camps?

The community puts Ellis’ name on streets and parks, but has given up on attaching it to an unflattering story. A more accurate name, Maya Fontenot said, would be the burial place of Sugar Land 95 at Ellis Convict Labor Camp Cemetery.

Protesters interrupted the program hosted by KPRC-2 news anchor Khambrel Marshall, which aimed to raise awareness of the region’s horrific convict hire system, a forced labor camp that effectively extended the slavery in Texas until the program was abolished in 1912.

“It’s a valid question and cause for discussion, but this is neither the time nor the place,” Marshall said as Fontenot and Aanchal Thadani were escorted out of the building by constables.

Others followed the two women, zigzagging at least half a dozen signs through Fluor Corporation headquarters on Saturday, which set the stage for the Society of Justice & Equality for the People of Sugarland.

The signs — marked with red, green and black mylar balloons — invited passers-by to “say the names” of the 95 African-American men whose remains were discovered on Fort Bend Independent School District property in 2019.

Davy Smith, a 23-year-old married laborer, died on November 16, 1890 after being hit by a streetcar at Ellis Day Camp.

“I thought there would be a Q&A session,” Fontenot says. “But when I saw there were no microphones in the crowd, I realized there weren’t. And I had to ask the question.

In 2021, Fort Bend ISD approved a $170,000 contract with MASS Design Group, a Boston-based nonprofit design collective, to design an outdoor exhibit near the James Reese Career and Technical Center, the construction of which led to the discovery of the remains.

Today, the elegant new facade of the Center contrasts sharply with the grassy, ​​unmarked burial site which lacks fencing or signage.

Jha D. Amazi, project manager and senior partner at MASS Design Group, was leaving the stage when Fontenot and Thadani disrupted the program.

Their petition, “All Black Cemeteries Matter: Tell the Truth of the Sugar Land 95”, suggests that the name “Bullhead Camp Cemetery” does not hold Ellis accountable for his brutal legacy and erases the memory of those who died at Bullhead Camp. owned by Cunningham.

The end goal is to convince Bob Brinkman of the Texas Historical Commission that “Sugar Land 95 Burial Site at the Ellis Convict Labor Camp Cemetery” would be more accurate.

Organizers and protesters agreed on other topics, such as honoring Reginald Moore, the late activist and former prison guard who warned the Fort Bend ISD official that they would likely find human remains during construction of the James Reese Career and Technical Center.

Or Oscar Perez, a project worker who pushed management to stop excavations after being initially told the remains discovered had less than a 1% chance of being human.

Author Matthew J. Mancini, Ph.D, read aloud excerpts from his book, “One Dies, Get Another: Convict Leasing in the American South: 1866-1928” as onlookers stepped outside to join the discussion led by Fontenot and Thadani.

Less than 10 feet away, a mother read aloud to her two sons the biography of West Scott, an 18-year-old farmer killed by a shotgun at Ellis Camp.

Plan your next vacation around a UNESCO World Heritage Site, by Travel Writers

Airbnb gets ahead of the competition and offers 850,000 listings with electric vehicle chargers