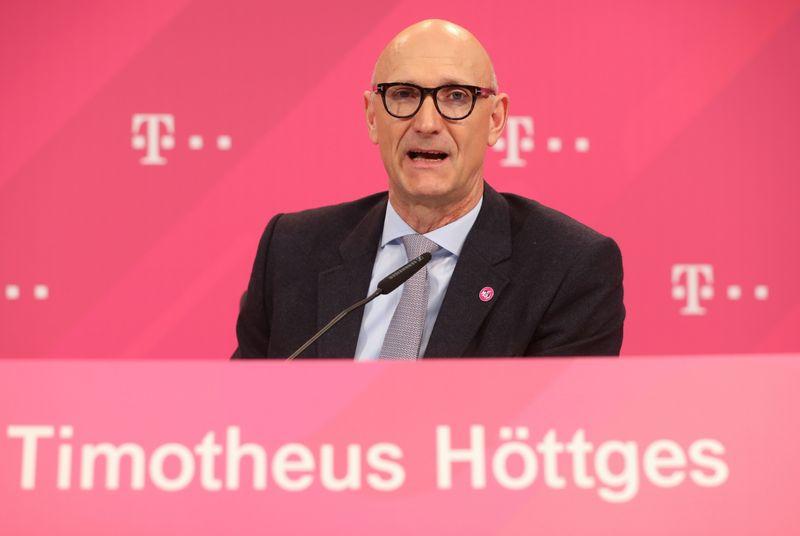 (Reuters) – Deutsche Telekom on Friday renewed its call for consolidation of European industry, saying sub-scale operators in the region were unable to invest more in 5G networks because of low profits and high debt consolidation weigh heavily.

CEO Tim Hoettges drew a stark contrast between the more than 100 European mobile operators and the US market, where the field narrowed to three players last April when Deutsche Telekom’s unit T-Mobile took over Sprint. for $ 26 billion.

“The industry is in a dilemma from which it can only escape through cost synergies,” Hoettges said at a press conference after Deutsche Telekom announced better than expected fourth quarter results.

“I deeply believe that European consolidation is necessary,” added Hoettges, echoing his comments made last August.

The outperformance of T-Mobile, which posted double-digit organic profit growth and accounted for three-fifths of the group’s revenue last year, overshadowed the more modest progress of Deutsche Telekom’s European operations.

It has also led investors to value Deutsche Telekom’s US operations more richly than those in its German home market and across Europe.

Of Deutsche Telekom’s $ 87 billion market cap, its 43% stake in T-Mobile is worth $ 65 billion, meaning the European part of the company is only worth $ 22 billion.

Yet Deutsche Telekom is in a strong position relative to its European peers, Hoettges said. Vodafone is worth $ 47 billion, Orange $ 32 billion and Telefonica $ 25 billion.

Deutsche Telekom is not in merger talks but is actively seeking network infrastructure partners for its mobile-only operations in Poland and the Czech Republic, Hoettges said.

“We are open to light or heavy partnerships,” he said, indicating that some form of equity participation could be part of any deal.

Deutsche Telekom provided an optimistic forecast for 2021, saying it expected a base profit of 37 billion euros ($ 45 billion) this year, which implies growth of 5.7%, while free cash flow would increase by 27% to 8 billion euros.

Analysts said the outlook for Telekom’s European business was in line with expectations. They also welcomed the clarity on investments in its German fiber optic network, which will accelerate in 2022 with the aim of reaching every household by 2030.

Excluding the effects of the US merger and other exceptional items, organic revenue increased 5.4% in the fourth quarter while adjusted profit before interest, taxes, depreciation and amortization after leases (EBITDA AL) increased by 9 %.

Management has confirmed that it will propose an unchanged dividend of 0.60 euro for 2020.

Deutsche Telekom shares reversed their initial losses to trade up 1% in Frankfurt, outperforming blue-chip stocks which were down a bit that day.