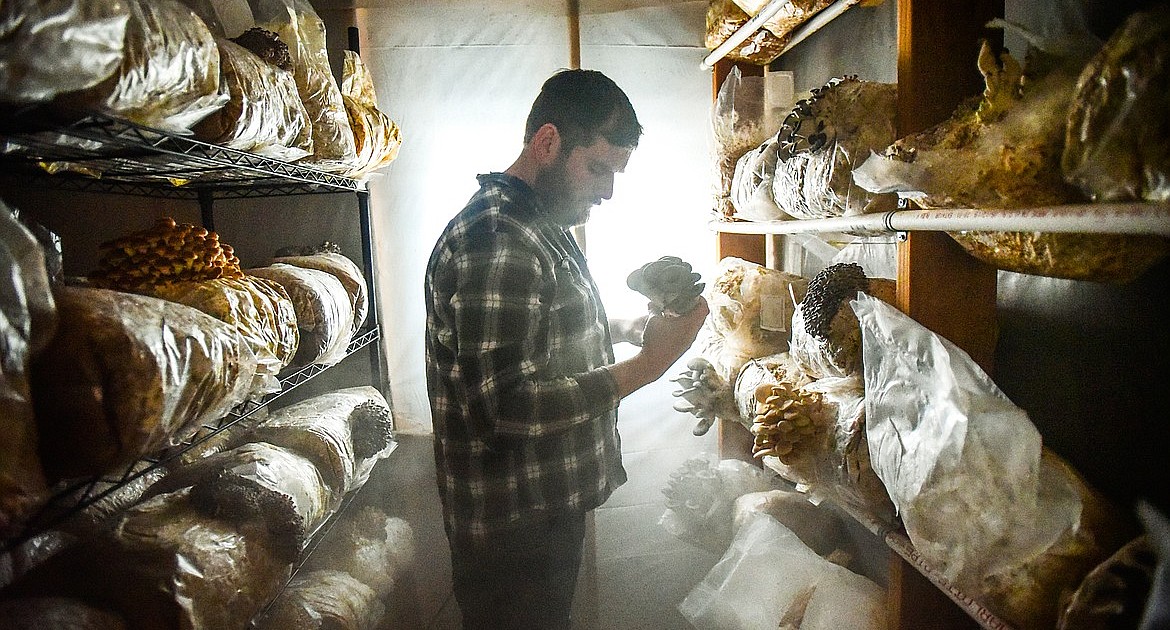 While they officially launched Sun Hands Farm four years ago, their mushroom growing learning journey began almost a decade ago.

“Our first children were mushrooms. We took them where we were going on vacation, we constantly made sure they were growing; that they had their humidifier. They had a special place where they stayed – we didn’t have a kid’s room or an extra bedroom, we had a mushroom room,” Jennifer said.

Shawn will share his years of knowledge in a mushroom workshop focused on growing mushrooms at home at the seventh annual Free the Seeds event which runs from Saturday March 5th to Monday March 7th with multiple virtual workshops and two distribution locations of seeds.

Land to Hand Montana hosts the event which aims to provide free seeds and agricultural workshops to communities in the valley. Some of this year’s workshops include pickling, making skincare products, and a cooking class for kids, among others.

Years later, the McDyres have real children that they can support by working on the farm. Shawn said ‘mushrooms are finally paying the bills’, after he and Jennifer settled on six acres outside Kalispell and left their careers to run Sun Hands Farm full time. The first year they grew mostly produce, but soon realized there was a greater demand for their mushrooms – a crop they can grow year-round in sheds.

Shawn said when the couple moved to Montana, they were interested in permaculture, alternative agriculture and microbiology. This naturally spread to mushroom cultivation, which was a difficult feat eight years ago before information about it was readily available on the internet. He said he started reading books on the subject and started experimenting.

“I converted our garage, parts of our house to all these growing processes and through years of trial and error, a ton of failures and horrible moldy experiences, we just learned this that works and then luckily four years ago when we got the farm there started to have more of a presence on Youtube and other social media where people were sharing what they were doing,” Shawn said.

With more people sharing how they grow their mushrooms, Shawn was able to work out the final flaws from his years of experience. Now they have no trouble growing the mushrooms or selling them. He and Jennifer have a stall at the Whitefish and Kalispell Farmers Markets in the summer and also offer a subscription box service. He said that every year more and more people are interested in mushrooms. Mushrooms provide a sustainable source of protein and can be grown indoors.

“So in a small area of ​​2 square feet, you’re growing pounds of fairly high protein food. Mushrooms fall between eggs and chicken in terms of protein content, and then the health benefits of mushrooms are off the charts,” Shawn said.

Shawn’s workshop at the Free the Seeds event will include low-tech, home growing methods that don’t require a ton of infrastructure. He said he would focus on growing oyster mushrooms which he considers easiest for beginners. Mushroom cultivation can be done on many surfaces, but things like straw and logs are best. Shawn said that once he learns the basics, he talks about growing other types of mushrooms and the differences between growing them on a commercial scale and small home growers. This is the fourth year that he gives the workshop and makes it available afterwards on their Youtube channel.

“Growing mushrooms at home has the same principles as gardening…in theory, it all seems very step-by-step, but sometimes there’s a lot of troubleshooting involved,” Jennifer said. “At first it sometimes seems like people are hoarding information, that it’s inaccessible or something they can’t understand, where that’s Shawn’s whole goal: to show people that it can be enjoyable. , it can be fun, it’s complicated, and you can fail. , but there are ways around it.

The mushrooms continue to put food on the table for Shawn and Jennifer. Soon, they hope to start offering more ready-to-grow mushroom logs – a kind of all-in-one package that makes growing a lot easier. In the summer, Sun Hands Farm has a stall at the Kalispell and Whitefish Farmers Markets, but their mushrooms are available year-round with their subscription box service and can be found at some local grocery stores. Find out where their mushrooms are sold at sunhandsfarm.com.

“I think the last two years have taught us that our food system is fragile and fragile right now, the more we can focus on local foods the better. ‘Saving the Seeds’ and Sharing is the theme of the event this year… the idea that you grow a bunch and share it with your community, with someone who doesn’t have that and pay for it. one way or another. You always learn something when you come to one of these workshops,” he said.

Seed distributions will take place from 9 a.m. to noon on Saturday, March 5 in Kalispell at Flathead Valley Community College in the west parking lot and in Columbia Falls at the ImagineIF Library.

Each virtual workshop will feature an expert presentation with time for questions and answers.

Saturday workshops include Building Community Seed Gardens by Robin Kelson of The Good Seed Co. from 2-3:30 p.m. and From Seed to Potent Skin Care by Annegret Pfeifer of Kettle Care Organics from 4-5:30 p.m.

Also on Saturday, a community conversation panel from 6-7:30 p.m. called Inform Our Future features presenters who will lead an open discussion with the panelists, then the floor will open up and attendees will be encouraged to engage in conversation.

Sunday, March 6, workshops include Growing Mushrooms by Shawn McDyre of Sun Hands Farm from 1-2:30 p.m.; Pickling Your Garden by Julie Laing by Twice as Tasty from 3 p.m. to 4:30 p.m.; Cooking class for kids by Farmer Whitney of Land to Hand Montana from 5-6:30 p.m.

On Monday, March 7, Seed Starting 101 will be held by Nathan Christianson of Raven Ridge Farm from 5-6:30 p.m.

Pre-registration is required for all workshops. Links to registration forms are available at landtohandmt.org/programs/free-the-seeds.

In addition to donating seeds, Free the Seeds welcomes seeds saved by local gardeners to pass on to other growers. Ancient, open-pollinated, non-GM seeds can be donated to the ImagineIF Libraries in Columbia Falls and Kalispell. Seeds can also be mailed to Land to Hand MT, PO Box 4404, Whitefish, MT 59937.