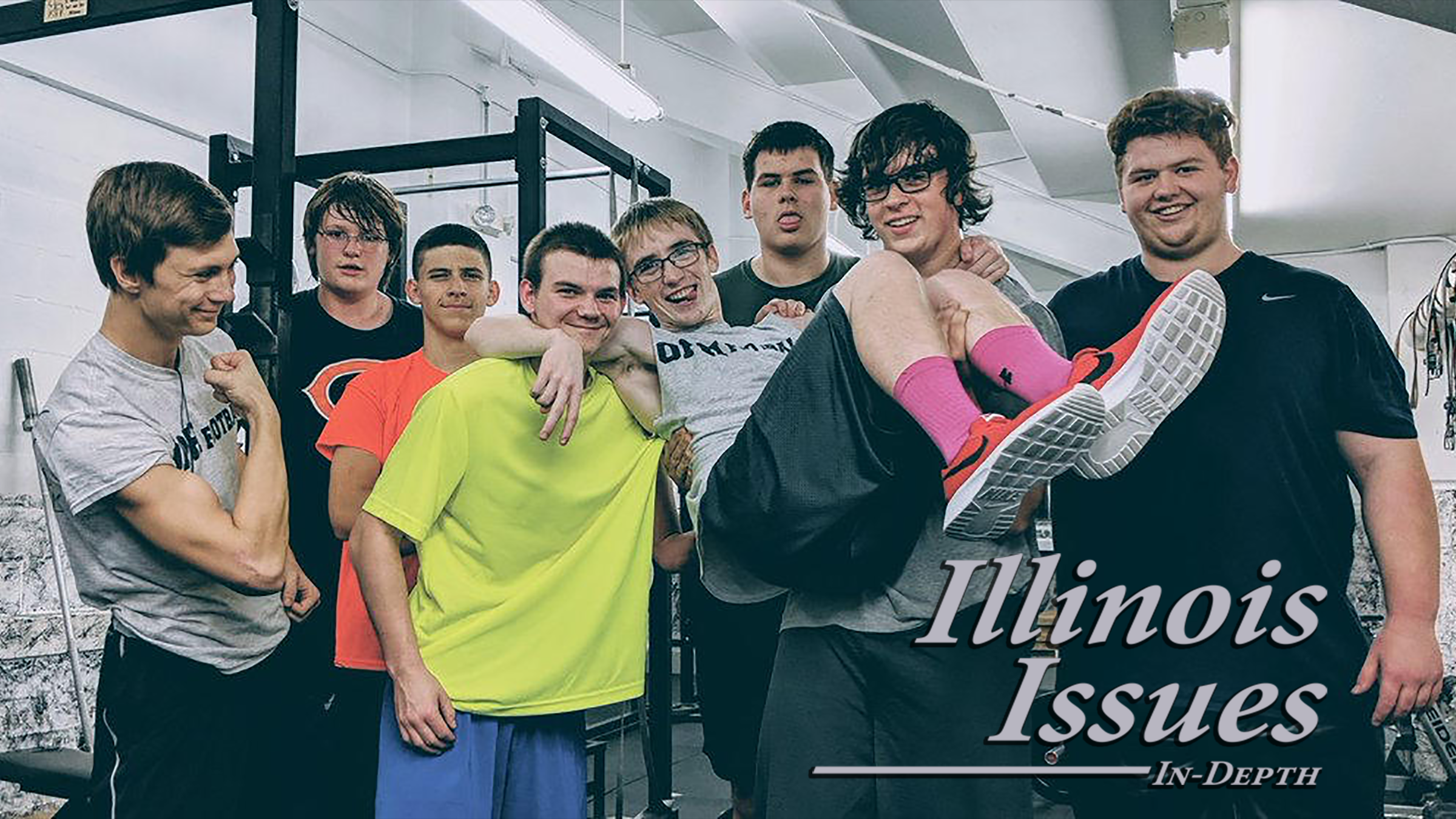 Illinois has 852 school districts, the third highest of any state in the country. Some are just single schools, with less than a hundred students. But merging or consolidating districts has proven difficult.

Last summer, Mark Ambrose became the head coach of a new football team. During the first practice, Coach Ambrose set the tone by sitting in the middle of the floor.

“And all three of them could easily come and get me,” he said. “I just used that as an example that they were stronger together.”

“Stronger Together” became the team motto – featured on t-shirts, chanted by cheerleaders, turned into a banner by kindergarten children. This was crucial, Ambrose said, because the team was a new co-op of athletes from three high schools in east-central Illinois – Palestine, Hutsonville and Oblong.

The team began training just months after two of those cities – Palestine and Hutsonville – attempted to take their merger beyond sports by asking voters to approve the consolidation of their school districts.

“The first time I visited Palestine, I remember seeing a billboard that specifically said Vote NO,” Ambrose says.

Alia Blackburn, a reporter for WTHI (the CBS affiliate in Terre Haute, Indiana), said residents were “extremely moved” by the vote. It was preceded by a series of town halls, which Blackburn covered. She says each of them was excited.

“You can tell by the passion in their voices and the expressions on their faces, their body language, that it’s something that is very close to their hearts,” she says.

But even though the towns are less than nine miles apart, with a total of just 750 students between them, voters decided by a tally of 494 to 317 that their school districts were further apart from each other.

This scenario is not uncommon in Illinois. With 852 districts – some with only one school, enrolling fewer than 100 students – consolidation happens and is often rejected, despite having supporters in both political parties. In fact, two different think tanks – the Better Government Association and the conservative Illinois Policy Institute – have advocated for the consolidation of more districts.

The IPI says the consolidation would lower taxes by reducing the number of principals who receive high salaries and large pensions. BGA emphasizes the stability of academic programs that could come from a stronger pool of teachers.

So what is the problem?

Legend has it that consolidation fails because no one wants to lose their mascot. But many schools play cooperative sport, like Ambrose’s “OPH” football team, and manage to compromise on the mascot.

Money can be a big sticking point, especially if a district is in debt or pays higher salaries to its teachers and staff.

“I think there are a lot of districts that want to explore consolidation,” he says, “but once they find out their kids are going to be on a bus, driving for hours in one direction, that ends to the conversation. “

He proposed a plan (SB 1369) that would allow any elementary district to dissolve and disperse its students among several neighboring districts (for the moment, they should only choose one). His plan got the green light in a preliminary hearing when he spoke to lawmakers at a school he represents.

Another measure (HB 3053), sponsored by State Representative Rita Mayfield (D-Waukegan), would form a commission to see which districts could save money by consolidating and then give taxpayers the opportunity to vote. The Senate version (SB 1838) of this measure would limit it to so-called unitless districts, like the one described by Rose – districts that only go up to grade 8 and districts that only serve grades 9 through 12. Most of our state school districts fall into this category.

Coach Ambrose’s side won more games in their first season than either Palestine-Hutsonville (which had been cooperating for some time) or Oblong the year before.

“We won three games,” said Ambrose. “I had a lot of guys who had never won a football game the whole time they were playing football. They just worked well together.