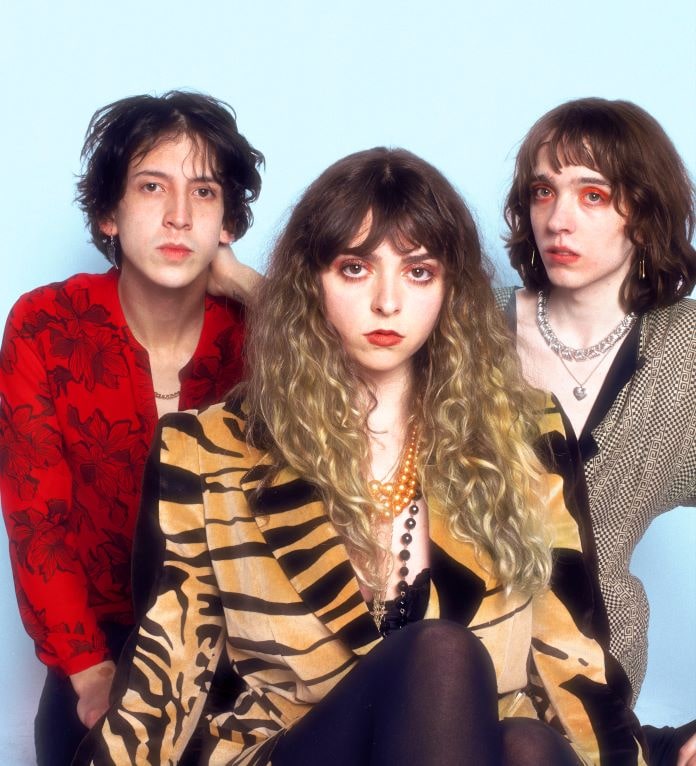 Boulder-based rock trio The Velveteers have built a monstrous sound over the past few years, earning a well-deserved reputation for their frenzied and theatrical live performances. Centered on the explosive guitar styles of Demi Demitro and the two drummers Baby Pottersmith and joint drums from Jonny Fig, the band became local heroes and caught the attention of Dan Auerbach of the Black Keys.

This fall, the group releases their first album produced by Auerbach Nightmare Reverie, bringing frantic live sound into the studio. They have already shared the first single from the record, “Charmer and the Snake” and today the band returns with their new single, “Motel # 27, which premiered with Under the Radar.

“Motel # 27″ is, as expected, a huge swagger rock-style hit. Although the group clearly took inspiration from vintage rock stars like T. Rex, with their latest effort, their stripped down sound taps into something fresh, mean, and primitive. The track is a wild journey of catchy riffs and tangled percussion, reinforced by surreal and paranoid imagery telling the story of a dark and alluring motel. Think of a more gritty and darker “Hotel California”. Meanwhile, the accompanying video transports you to the titular hotel from another world, framed in claustrophobic close-ups and dreamlike lighting.

Check out the song and video below and watch for Nightmare Reverie, released on October 8 via Easy Eye Sound. Demi Demitro also answered a few questions for us about the song and the upcoming album. Read the questions and answers below.

Motel # 27 was inspired by that time, baby and I stayed at this crazy motel in the desert. It was like a feverish dream.

The song is full of surreal lyrics like “The Lemon Lizard has tied your tongue in a twist.” What’s your writing process?

Our writing process is always different. For this particular song, Baby had written a poem after our stay at this motel, and then the next day I was so inspired by the poem that I wrote a song about it.

You and Baby started making music together when you were fourteen and fifteen. How have you grown together as musicians since then?

It’s crazy to think it’s been so long! We’re artistic soul mates and I think we’ve learned to really work on each other’s creativity which was a bit difficult for us at first because we both have a very strong vision of what we want. We definitely drive ourselves crazy to perfect our designs, but I think it’s a good thing and also rare to find someone who is equally dedicated to the process. Baby has all of these amazingly awesome ideas that are sometimes things I would never have thought of and the result is always something magical.

What was it like working with Dan Auerbach on the record?

What are the recent records, books or films that have inspired or influenced you?

I’ve watched a lot of Maya Deren movies and I’m a huge Nadia Lee Cohen fan. We drew a lot of inspiration from them for this record. I also like the book “The War of Art” by Steven Pressfield. I recommend to anyone who is creative to read it, it will change your life.

With Nightmare Reverie being your first record, where do you see your sound evolving?

I’m not sure and think nothing can be predicted but I’m ready to go where the ether takes me.

Refresh the house and the next vacation; Double Chocolate Zucchini Bread | Food drink