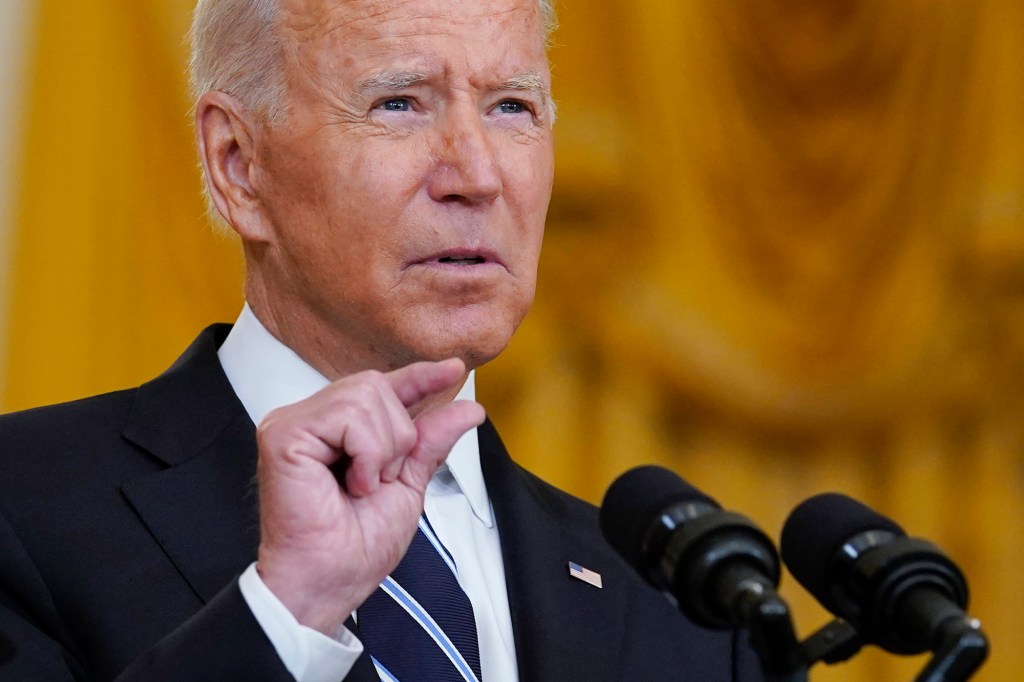 Our Empathizer-in-Chief has no clothes.

The crisis in Afghanistan, which is escalating with the force and vastness of a nuclear bomb, is clearly a huge nuisance to President Biden. His behavior this week is that of a brooding 12-year-old boy whose summer vacation has been cut short.

He had to be dragged from Camp David to address the nation last Monday, and as the week went on he couldn’t believe it was still a thing. Irritation is his current mood.

Even a gentle interrogation from sympathetic Democrat George Stephanopoulos failed to elicit sympathy from Joe.

What about those desperate Afghans clinging to the side of an American military plane as it took off, falling to death in front of the world?

“It was four days ago, five days ago! spat the president.

It was actually two days before, but that’s not my point.

Ladies and gentlemen, the mask has fallen.

It is not old age. It is not a political challenge or a mental flaw.

This is a cruel and callous disregard for human life – lives lost due to Biden’s insistence on withdrawing quickly, keeping our allies in the dark. American civilians on the ground, now hidden from the Taliban, received no warning.

As for the Afghans who risked their lives, and the lives of their families, to help us, President Biden does not care either.

The other Joe Biden, the one you thought you knew, was a facade, a masquerade, a mirage, a scam.

Biden built a political career on mourning. There was no stump speech or interview where he once hesitated to exploit the tragic death of his first wife and 13-month-old daughter in a car crash in 1972, or the trauma of his two surviving sons Hunter and Beau, or Beau’s death from cancer in 2015.

Joe Biden has written books on empathy and grief. He commodified and exploited his losses. He became DC’s go-to praise (The New York Times published a Love Taxonomy). He gave interviews untold in his expertise.

“The things that gave me comfort and help, I’m trying to convey them,” Biden told People magazine a few days before the 2020 election. “What I find is I think that the worst thing I can do is when somebody confides in me, and I can feel the pain, just say, “Well, it’s gonna be okay,” and move on. “

Is there a more appropriate description of President Biden’s performance last week?

He literally told the world that despite the chaos and atrocities we are witnessing, despite his complete lack of a plan or interest in crafting a plan, everything will be fine one way or another.

Not hard to see why. The mainstream media have applauded this bile for decades, never louder than during Biden’s campaign against Trump.

And yes, for our thinking experiment: imagine if it was Trump. There would be calls for impeachment. The mainstream media would explode in just fury. In New York magazine, there is more outrage and moral outrage about what goes on in “The Real Housewives of Beverly Hills” than what Biden did not do last week – without exaggeration.

How did we get here? Let’s look at our pre-election media coverage:

“Joe Biden… And the importance of empathy. Time magazine, November 7, 2020.

“Through [his] mourning journey, Biden. . . forged in him greater empathy and compassion, ”said the Atlantic, two weeks before the election. “Biden may be the person America needs. “

All that slobbering on Joe, despite his reputation inside the Beltway as a long-standing political hack, a mediocrity who understood nothing about foreign policy, geopolitical strategy, or cared at all about the human cost of politics. war.

Here is the late Richard Holbrooke’s account of a 2010 conversation with Biden, as recorded in his diaries and reprinted in the 2019 book “Our Man”:

“… [Biden] said we’re going to lose the presidency in 2012 if unemployment remains high, and Afghanistan was the other issue that could bring us down and we have to be on the right track, that we have to do what we did in Vietnam.

“It shocked me and I immediately commented that I thought we had some obligation to the people who trusted us. He said, ‘Fk that, we don’t have to worry about that. We do. did it in Vietnam, Nixon and Kissinger got away with it. ‘ “

Babies thrown on barbed wire at Hamid Karzai airport? Nary a word.

This despite what a traumatized British soldier told the UK Independent last Thursday.

“The mothers were desperate,” the officer said. “They were being beaten by the Taliban. They were shouting, “Save my baby! and threw the babies at us. Some of the babies fell on the barbed wire. . . At the end of the night, there wasn’t a single man among us who wasn’t crying.

This is the last train from Berlin.

Still, it wasn’t until Saturday afternoon that Biden announced he would stay in the White House, rather than retreat to his Delaware home for a bit of R&R.

After all, optics demand it. As for Taliban death squads going door-to-door, Americans have been told to go underground, reports of an Afghan woman being burned alive for “bad cooking”, the fate of those we promised to do. protect ?

The mother leaves her husband to go on vacation to teach him a lesson.

So much for this second home boom?