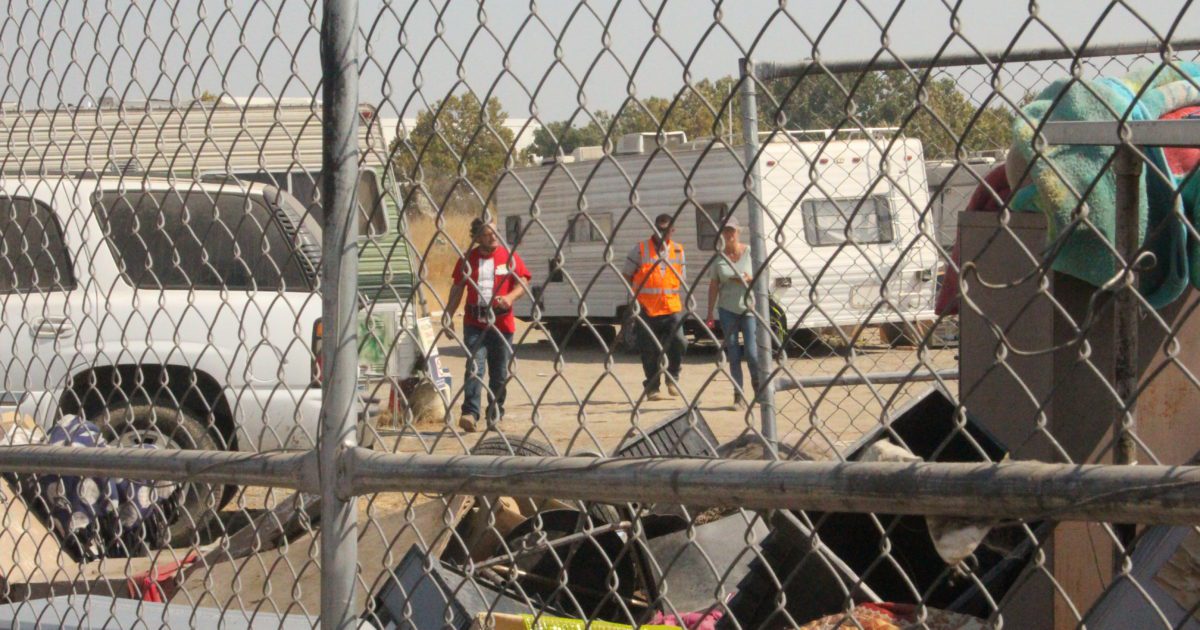 Finding shelter and services for dozens of homeless residents is not easy, especially when it has to happen in a matter of weeks. But HomeFirst CEO Andrea Urton said it was doable when you had the right resources.

Last week, residents were forced out of a massive homeless settlement at Component Drive in North San Jose on land owned by Apple. Urton, who runs a nonprofit that connects the homeless with services, has had weeks to put a roof over people’s heads, but she is proud that every resident interested in a shelter and help got what he wanted.

“After two weeks, we had pretty much everyone offsite and in temporary shelter,” Urton told the San José Spotlight.

The homeless settlement on a 64-acre stretch of vacant land has housed up to 100 people inside tents and vehicles for at least two years. Apple, which intends to develop the land, contracted HomeFirst last month to help move people to temporary shelters.

“They wanted to find a solution for their site, but I also understood that Apple didn’t want to launch people without mercy and make them homeless… and that I really respect,” said Urton, adding that Apple had provided several million dollars. support for the operation.

Apple has offered to pay for each resident to receive nine months of temporary accommodation in motel rooms and one year of services, including help with mental health issues and addictions. Urton said lengthy case management is particularly critical as homeless people leaving a camp often experience physical or mental crises, sometimes both, which can be made worse by drug or alcohol addiction.

In August, HomeFirst workers met with camp residents to discuss accommodation options. Those interested in moving to motels were given showers and their things were placed in a hot box to eliminate bedbugs. Then HomeFirst transported them to several shelters, moving people in small groups.

Urton said people can bring multiple bags of goods and those with RVs or cars can park at the shelter sites. For residents who turned down a motel room, HomeFirst offered space in a city-run secure parking site that opened last week at 71 Vista Montana. Some neighboring residents oppose the plan and have circulated a petition demanding that people not be relocated to the site.

Claims were made earlier this week by homeless advocates that women were being placed in rooms with men they did not know. Urton categorically denied this.

“We would never do that,” said Urton, adding that HomeFirst kicked someone out of the program who had committed domestic violence.

Urton said residents of the encampment are staying with their families. But, she added, the “family” is not limited to biological parents; it also covers groups of people who have bonded in the camp and want to stay together.

The long-term plan for those displaced from the settlement is to find permanent homes for them. Urton noted that HomeFirst assessed residents who left the camp using a vulnerability index used by service providers across Santa Clara County to assess an individual’s risk of dying on the streets. . Those with the highest scores received the services first.

She said it might be difficult to find permanent housing for those at the bottom of the list, given the lack of affordable housing in Santa Clara County.

“Shelter beds will always be an option for people,” said Urton.

Gail Osmer, a longtime homeless activist, has been following the Apple site cleanup closely. She said HomeFirst has done a good job of getting people to motels, but she wants to make sure the organization keeps its promise to fix their vehicles. Urton said a volunteer mechanic always helps people fix their cars and RVs.

“Overall I think they did a good job on this one,” Osmer said. “I think things are going pretty well with the people in the motels. They seem to be happy there.